And Now a Message from the Father of Our Country 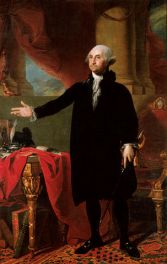 No doubt about it. We live in a time of partisan division not seen since the Civil War. Just last week, in a spirit of revenge, the GOP-dominated North Carolina state legislature voted to strip the incoming Democratic governor of some of his powers. Throughout this past presidential election cycle, voters were the targets of a relentless, partisan-driven campaign of misinformation. Emails of both parties were also hacked by a foreign power bent on influencing the election. Yet all of these outrageous acts (political revenge, misinformation, and foreign meddling) were foreseen 220 years ago by the Father of our country, George Washington.

In 1796, upon declining a third term, our first President (with the help of Madison and Hamilton, who both at some point had a hand in the writing) issued a bit of parting advice to the fledgling nation. Partisan politics and the evils bred by political parties come under  especial condemnation because of their power to destroy a republic. His words now seem tragically prophetic. (Italics mine.)

Let me now take a more comprehensive view, and warn you in the most solemn manner against the baneful effects of the spirit of party generally.

This spirit, unfortunately, is inseparable from our nature, having its root in the strongest passions of the human mind. It exists under different shapes in all governments, more or less stifled, controlled, or repressed; but, in those of the popular form, it is seen in its greatest rankness, and is truly their worst enemy.

The alternate domination of one faction over another, sharpened by the spirit of revenge, natural to party dissension, which in different ages and countries has perpetrated the most horrid enormities, is itself a frightful despotism. But this leads at length to a more formal and permanent despotism. The disorders and miseries which result gradually incline the minds of men to seek security and repose in the absolute power of an individual; and sooner or later the chief of some prevailing faction, more able or more fortunate than his competitors, turns this disposition to the purposes of his own elevation, on the ruins of public liberty.

Without looking forward to an extremity of this kind (which nevertheless ought not to be entirely out of sight), the common and continual mischiefs of the spirit of party are sufficient to make it the interest and duty of a wise people to discourage and restrain it.

It serves always to distract the public councils and enfeeble the public administration. It agitates the community with ill-founded jealousies and false alarms, kindles the animosity of one part against another, foments occasionally riot and insurrection. It opens the door to foreign influence and corruption, which finds a facilitated access to the government itself through the channels of party passions. Thus the policy and the will of one country are subjected to the policy and will of another.

There is an opinion that parties in free countries are useful checks upon the administration of the government and serve to keep alive the spirit of liberty. This within certain limits is probably true; and in governments of a monarchical cast, patriotism may look with indulgence, if not with favor, upon the spirit of party. But in those of the popular character, in governments purely elective, it is a spirit not to be encouraged. From their natural tendency, it is certain there will always be enough of that spirit for every salutary purpose. And there being constant danger of excess, the effort ought to be by force of public opinion, to mitigate and assuage it. A fire not to be quenched, it demands a uniform vigilance to prevent its bursting into a flame, lest, instead of warming, it should consume.